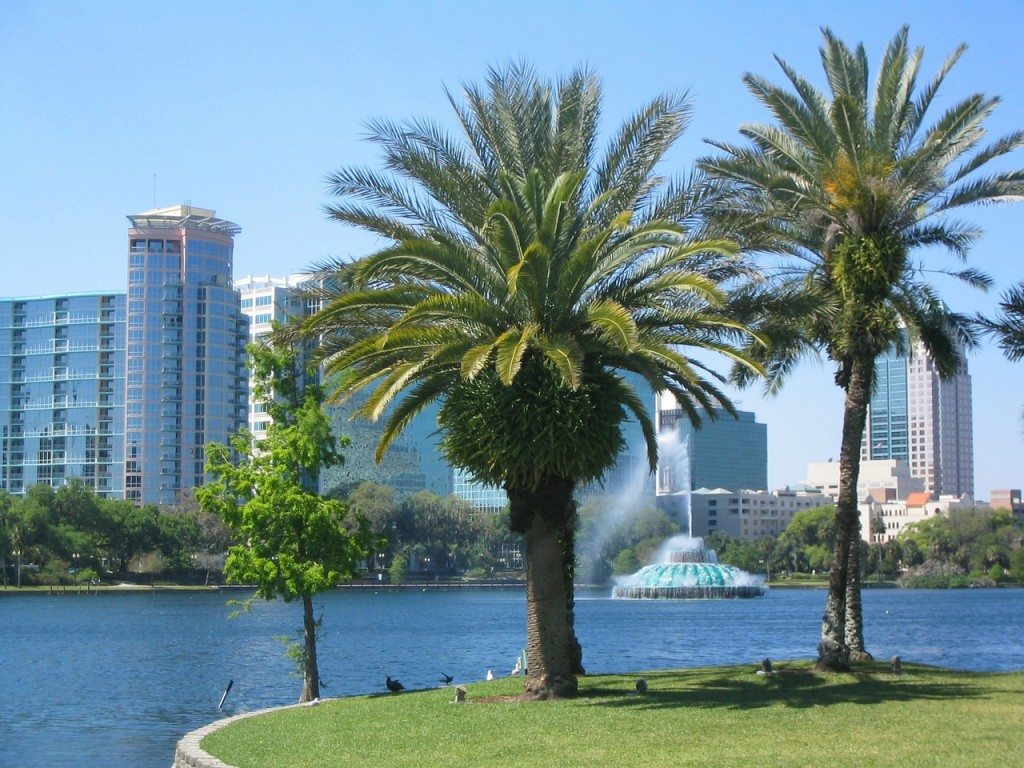 An independent city created for northern snow birds, Winter Park is Orlando’s quintessential “old money” neighborhood. Posh boutiques and museums dot this charming enclave where the women are just a little bit blonder and a little bit thinner than anywhere else. Cobblestone streets are the norm here, as are wonderfully old oak trees covered in Spanish moss. Rollins College is the town’s cultural center, with its chapel serving as the backdrop of a popular classical musical series.
Neighborhood residents — largely well-to-do families — have more than a few cultural gems in their own backyard, such as the intimate but stunning Charles Hosmer Museum of American Art, which holds a respectable collection of works by Louis Comfort Tiffany. Fine dining options and specialty shops are abundant here, particularly along well frequented Park Avenue, but residents may also enjoy less expensive fare: a Saturday farmers market at 200 W. New England Ave. offers fresh produce, exotic spices, baked pies and homemade jellies, among other treats. Wonderful ethnic options are also available, such as Sazon436 on Semoran Boulevard (State Road 436), which was voted Orlando’s Best Puerto Rican restaurant in a recent Orlando Sentinel survey.

Deriving its name from streets named after colleges (Princeton, Harvard, Yale, et al), this neighborhood packs a punch because of its proximity to downtown Orlando and low-key beauty. Longtime elderly residents live alongside newer Orlando denizens, many of them professionals, in charming, though not inexpensive, homes. The area’s hip specialty stores and restaurants as well as its close proximity to Loch Haven Park, the city’s cultural corridor, also add value to this area.
College Park is highly walkable, a factor prospective homeowners are increasingly taking into consideration before committing to a purchase. If you go for a day visit, do check out the Harmoni Market, a Mediterranean deli serving delicious gourmet goodies. You may also take a stroll by Jack Kerouac’s former home, where the beatnik best known for writing On the Road lived for a time. Today, the house provides aspiring writers with free housing for three months as they work on their next masterpiece.

Home to thousands of students attending the University of Central Florida, Orlando’s largest state school, this neighborhood is dynamic, young and ethnically diverse. Traffic can get a little hectic at times, but living next to one of the largest universities in the country has lots of cultural pluses. Locals, for instance, may attend a football game at the brand-new Bright House Stadium (UCF is trying to beef up its sport creds), catch a play at UCF’s Conservatory Theater and crash a host of lectures and film viewings on campus at a low cost or entirely for free.
Most residents live in owner-occupied, single-family homes, but rentals abound thanks to student demand. The neighborhood also hosts a vibrant and large immigrant population that contributes great ethnic food options, such as Rice and Beans Cocina Latina, on Alafaya Trail.

Lake Nona is an up-and-coming neighborhood attracting families from different socioeconomic backgrounds, with housing units ranging from luxury homes to townhouses available to suit many budgets. Originally conceived as a 7,000-acre golfing mecca, the area is perhaps best known for the Tavistock Cup, a competition held each year among the best professional players from the Isleworth and Lake Nona country clubs.
Recently, Lake Nona has been trading its exclusive “golf” image for a more scientifically cutting-edge one. A Medical City, which includes the biotech research group Burnham Institute, the University of Central Florida’s medical school, a veterans hospital, and a 500-acre science and technology office park are slated for construction on the site. These projects promise to add real estate value to this still-evolving neighborhood in South Orlando, which developers say has another 10 to 15 years of growth and expansion ahead. Its close proximity to Orlando International Airport is also a plus for those with regular business commutes.

Though technically in Kissimmee, Celebration likes to think itself as an independent city catering to middle and upper middle class families (quite a few of them employed at neighboring Walt Disney World). Modeled after small American towns from the early 1900s, the place has a feel reminiscent of a Hollywood movie set. Though it’s been derided in popular culture for being artificially squeaky clean and predictable, Celebration’s design has its pluses: besides having its own Town Center with several restaurants and shops to choose from, Celebration allows for pedestrian traffic, a rarity in today’s suburban America. Locals often walk, bike or ride in electric vehicles to get around.
Celebration also works hard to create a sense of place and neighborliness through a host of annual events, such as an exotic car show, the Great American Pie festival and an Oktoberfest party. Fall and Christmas events feature fake falling leaves and artificial snow, respectively, blown to the public’s delight in the neighborhood’s Town Center each year.

Pack an overnight bag containing all the essentials. Chances are, you’ll be too tired to…

Get Prepared For Your New Orlando Move

Here are seven advantages of why you should hire us. 1.      More organized We take…

Recent Posts
Archives
Categories
Meta
Ready to get your residential or commercial move started? It's as simple as getting your free, no-obligation quote. We know you'll be glad you did!
Request Free Quote
Copyright © 2020 Orlando Moving Company, LLC. - All Rights Reserved.
Back To Top